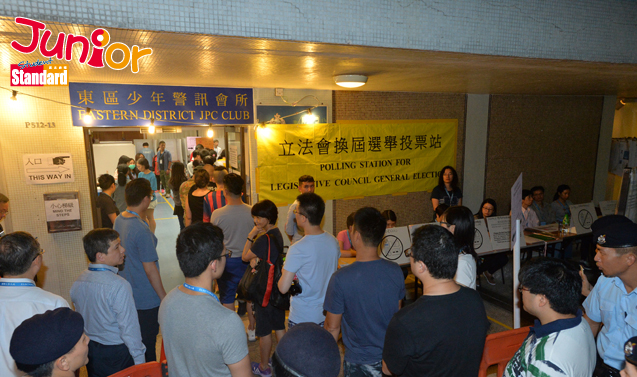 Chairman Barnabas Fung Wah (馮驊) said that up to 3pm on 4 September, 462 complaints against election advertisement and 192 complaints on electors’ eligibility to vote and the voting arrangement were received.

There were also people complaining about voters successfully casting their ballots after providing photocopies of their Hong Kong ID card.

Fung said the commission would investigate the complaints.

Facebook users said a lot of first-time electors were not allowed to vote for the super-seat election when they arrived at polling stations.

According to the Registration and Electoral Office (選舉事務處), a total of 3,779,085 people are eligible to vote, among whom 239,724 can vote in functional constituencies and 3,473,792 can vote for the super-seat election.

This means 65,569 voters did not register as a super-seat voter.

A New Territories East (新界東) voter complained she discovered a ‘tick’ symbol already stamped on her super-seat ballot paper when she received it at the polling station in Lee On Estate (利安邨), Ma On Shan (馬鞍山).

She complained to polling agent Mak Yun-pui (麥潤培), who said the incident might just be the “tip of the iceberg” and suspected illegal conduct.

“According to the Electoral Affairs Commission, it could be counted as a valid vote even with the tick stamped near the candidate’s information, but not inside the circle. As presiding officers could bring the ballot boxes and ballot papers home, illegal conduct could be involved,” Mak said.

Questions raise...
A WOMAN who was dissatisfied b...