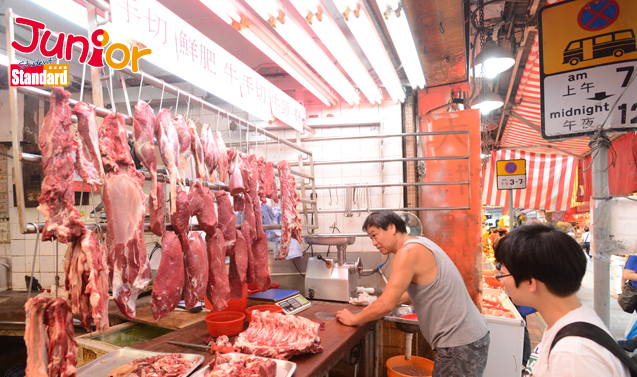 A SAMPLE of fresh beef has been found to contain a banned chemical used as a preservative to make meat look fresher.

The Centre for Food Safety (食物安全中心) said on 10 August that the sample taken from a market stall in Sai Wan Ho (西灣河) was found to have sulphur dioxide during a routine check.

The test result showed that the sample contained the chemical at a level of 575 parts per million.

A spokesman said sulphur dioxide is commonly used as a preservative in a variety of foods, including dried fruit, pickled vegetables and meat products such as sausages, but it is not allowed in fresh or chilled meat.

He said the preservative is of low toxicity and water soluble, meaning that most of it can be removed by washing and cooking.

But individuals allergic to the chemical may experience breathing difficulties, headache and nausea.

The public has been warned not to buy or eat meat that is unnaturally red.

Just a week earlier, the government said anti-asthma drugs were detected in the urine samples of 319 live pigs imported from Jiangxi (江西) province. About 40 of the pigs were sent to market despite a monitoring system.

The authorities disclosed a list of 27 retail outlets where the tainted pork was believed to have been delivered, and destroyed 3,500 kilograms of pork seized from vendors.

These moves led to an outcry from the industry, as some vendors insisted that they did not purchase the batch of tainted pork.

Involved buyers and pork vendors were told to submit the receipts of their purchases for the government to trace where the tainted pork was distributed.