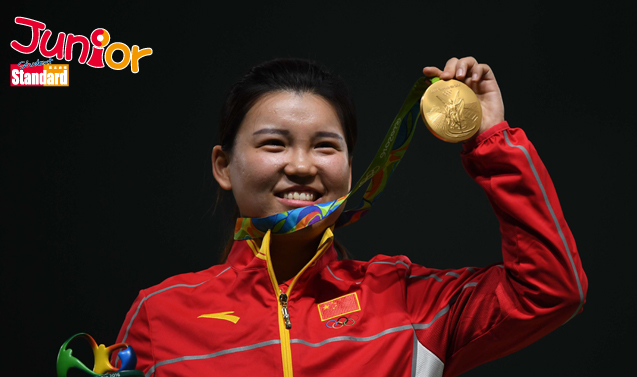 Zhang grabbed her chance to secure the title after compatriot Guo Wenjun (郭文珺), the champion in Beijing in 2008 and in London (倫敦) four years ago, misfired badly in qualifying to miss out on the final.

Zhang’s golden shot came after China finished the first full competition day of the Games without a gold medal, its worst performance since the 2000 Sydney Olympics (悉尼奧運會).

The Chinese were pipped for golds in shooting - the men’s and women’s 10-metre air rifle events - and in swimming with the men’s 400-metre freestyle, leaving them 11th in the medal standings after the first day with two silvers and three bronzes. Australia (澳洲) led the way with two golds and one bronze.

Most Chinese attention was on the pool, with 24-year-old Sun Yang (孫楊) a pre-race favourite in the men’s 400m freestyle.

Sun, the defending champion for the 400m and 1,500m freestyle, finished in 3 minutes 41.68 seconds, 13 hundredths of a second slower than Mack Horton (霍爾頓), Australia’s first gold medallist in Rio.

There was also disappointment in men’s gymnastics, which has been one of China’s favourite medal pursuits. Chinese gymnasts had to settle for just three finals - rings, horizontal bars and the individual all-round competition.