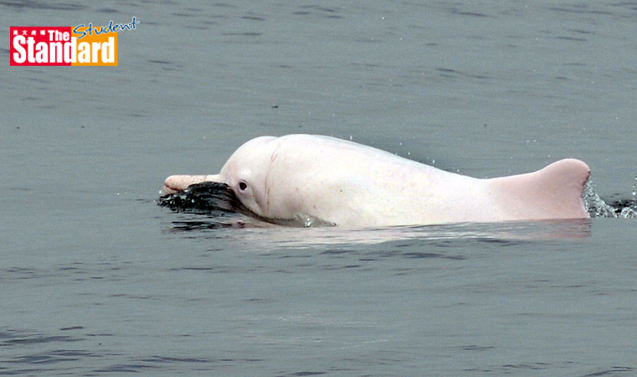 HONG Kong’s iconic Chinese white dolphins are dwindling fast, with fresh evidence showing an alarming 60 percent plunge in their numbers in one year mainly because of the construction of the Hong Kong-Zhuhai-Macao Bridge (港珠澳大橋).

WWF-Hong Kong (WWF, 世界自然基金會‎) fears the dolphins will face an even graver threat when construction of the airport’s third runway starts as that involves reclamation of four times more land than the bridge and takes double the time to build.

The conservation group urged the government to immediately designate waters off Tai O (大澳) as the West Lantau Marine Park (西南大嶼山海岸公園) and set a timetable to expand marine-protected areas to cover at least 10 percent of Hong Kong waters.

According to the latest annual dolphin monitoring report of the Agriculture, Fisheries and Conservation Department (漁農自然護理署), there were 65 dolphins in western Hong Kong waters - from Tuen Munto Sokos- April 2015 and March this year. The number stood at 87 the year before.

No sightings were reported in northeast Lantau last year, which used to be their core habitat. Northwest Lantau posted an 88 percent plunge in cetacean sightings over the past 13 years.

The percentage of juvenile dolphins also dropped to a historic low in the past 14 years.