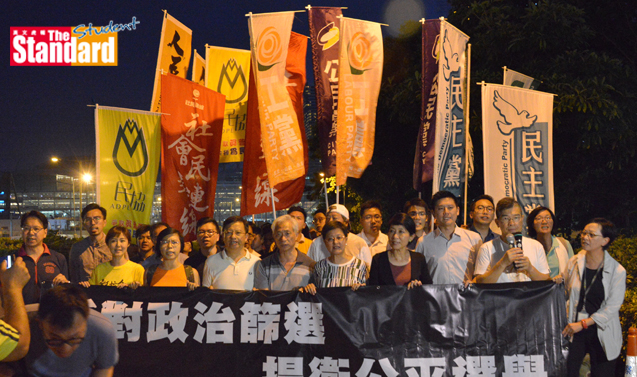 CANDIDATES running for “super seats” in the Legislative Council (立法會) may have different political views, but they have one point in common: they are against calls for Hong Kong to become independent.

The three pro-establishment aspirants - Wong Kwok-hing (王國興) of the Federation of Trade Unions (香港工會聯合會), and Starry Lee Wai-king (李慧琼) and Holden Chow Ho-ding (周浩鼎) of the Democratic Alliance for the Betterment and Progress of Hong Kong (民主建港協進聯盟) - dismissed calls for independence as irresponsible, saying these are getting the city nowhere.

Lee believes independence should never be an option as it would lead the SAR to a dead end.

“This road will lead Hong Kong nowhere. It’s a dead end, but the central government should also think why some people find independence attractive.”

Chow accused those advocating independence of destroying the economic bond between Hong Kong and the mainland.

“Independence has initiated controversy between the two sides. That will damage Hong Kong’s economy, and citizens won’t be able to make a living,” he said.

The six pan-democratic candidates focused their comments on the person they claimed had spurred the independence movement, Chief Executive (行政長官) Leung Chun-ying (梁振英).

Pan-democrats have repeatedly slammed Leung for igniting the independence appeal by his provocative remarks.