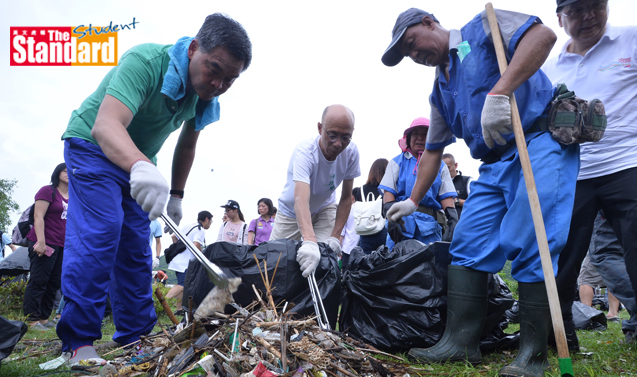 CHIEF Executive (行政長官) Leung Chun-ying (梁振英) helped clean up a Lantau (大嶼山) beach on 10 July after an unusually large amount of marine rubbish was swept up on the shore following storms and floods in the mainland.

But he fell short of outlining what sort of immediate measures he would take to fix the problem, only saying the government has been cooperating with Guangdong (廣東) over the growing surge in mainland trash ending up in Hong Kong.

Critics labelled the clean-up campaign a publicity stunt that fails to tackle the root of the problem.

Leung turned up at the south Lantau coast of Shui Hau (水口) with six policy secretaries and five undersecretaries.

“This is a special situation. It may be possible that the heavy rain and floods in the mainland have flushed domestic waste to our coastline,” said Leung. “The government has been cooperating with the Guangdong government to monitor the situation closely.”

Leung stressed several times that environmental protection was the responsibility of society as a whole, and source reduction was the first step.

Prior to his arrival, about 20 cleaners started picking up rubbish along the coast, consciously leaving several piles of trash on the shore for the officials’ easy collection.

Wearing gloves and holding a pair of tongs, Leung collected three bags of rubbish in 40 minutes.

A government spokesman said about 78,000 kilograms of marine refuse had been collected from beaches in the first nine days of July.