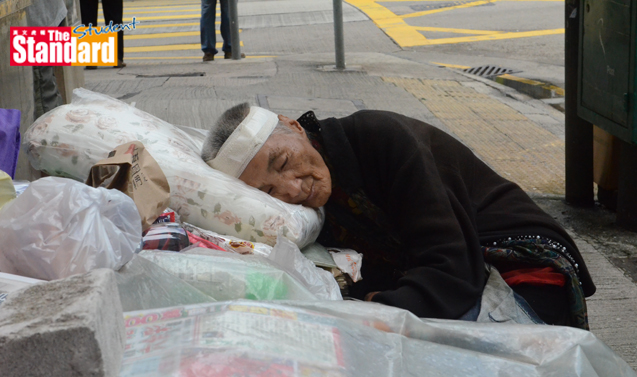 PEOPLE have generously given at least HK$110,000 to an elderly Mong Kok (旺角) newspaper kiosk operator who was robbed of about HK$10,000.

Nicknamed ‘Sleeping Granny’ (睡婆婆), Cheung Chan Fuk-hing (張陳復興) sleeps in the stall in Shan Tung Street (山東街). The 74-year-old was robbed and injured on 2 July for a second time. Her two daughters and son have been trying to convince her to give up the stall but she insists on continuing to run the business started by her mother.

Since the robbery, people have been dropping HK$100 notes for a newspaper. Some HK$47,000 was donated on the day of the robbery and HK$63,800 the day after, according to a nearby Chinese herbal tea shop worker surnamed Lau who said he put the money in a bank account in case it would attract more robbers.

Police officers on patrol told her to seek medical care at a nearby hospital for the wound at the back of her head, but she refused, saying she stays in her stall all the time. A worried female nurse visited the stall to disinfect the woman’s wound.

It is understood that ‘Sleeping Granny’ helped a restaurant worker before by lending her HK$100,000, but she was not willing to reveal more about her good deeds. “If one can help, one should. It is good if people help each other,” she said.

A six-year-old girl surnamed Wong, who visited the kiosk, gave HK$5,000 - all of the lai see money she received in two years. A woman surnamed Chui who lives in Tsing Yi (青衣) also visited after a sleepless night during which she regretted not taking good care of her now-deceased mother.

Thief steals $35,000 from elderly newspaper vendor while she sleeps
http://goo.gl/9u8Yjx