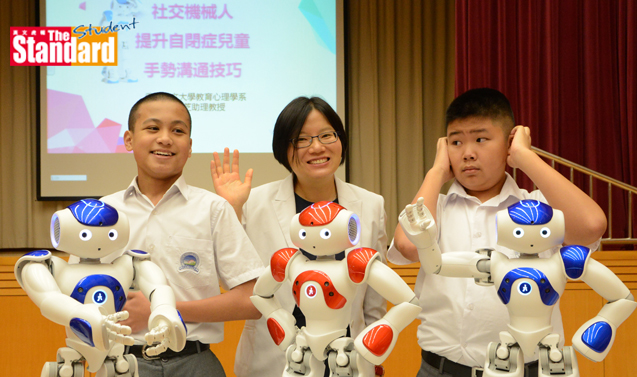 An interdisciplinary research team, led by assistant professor So Wing-chee (蘇詠芝) at the university’s department of educational psychology, used the NAO robots - developed by Paris-based Aldebaran Robotics - on autistic children for the first time in Hong Kong, and even the world.

Three robots - named Sunny, Mira and Kia - were used to teach the children with low-functioning autism spectrum disorders, or ASD, to communicate effectively their needs and feelings via eight gestures of being angry, annoyed, dizzy, scared, hot, hungry, noisy and smelly.

The university research team partnered with Hong Chi Morninghill School, Tsui Lam (匡智翠林晨崗學校) - a school for special needs students in Tseung Kwan O (將軍澳) - to use the social robots to teach their students, aged six to 12, to recognise and produce the target gestures.

“Individuals with ASD tend to have low interest in other humans and they prefer robotic toys. Gesture is an effective channel for communication. It can help reduce challenging behaviours of autistic children,” So said.

She added that the robot intervention programme can be widely used in clinical settings, special schools and even mainstream schools that have been accepting an increasing number of students with autism.

A student who participated in the programme said the robots were very helpful because they understood his needs.

So said: “Human beings have really complicated facial features and emotional expressions. This overloads autistic children with expressions. However, robots are much simpler, avoiding the problem of overloading and distractions.

“Thus, when children face robots they feel more comfortable and their concentration will be entirely on the robots.”