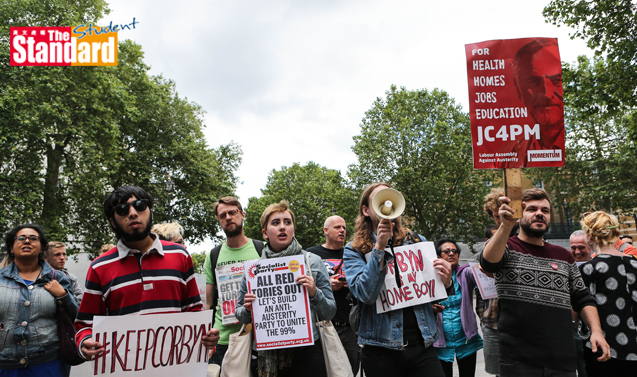 BRITAIN (英國) plunged deeper into political crisis on 26 June following its vote to leave the European Union (歐洲聯盟) as confusion and uncertainty spread to the continent, where officials were unable to agree on what to do next.

The turmoil also caused alarm around the world; China’s finance minister said fallout from the referendum on 23 June “will cast a shadow over the global economy” while a senior official in Tokyo warned of the danger of “speculative, violent moves” in currencies.

Britain’s finance minister was to make a statement to provide reassurance about “financial and economic stability”.

Splits widened across the nation. Over three million Britons signed a petition demanding a re-run of the referendum, with the number climbing by the hour, and an opinion poll showed a large majority in Scotland (蘇格蘭) now want to break with the United Kingdom (英國).

Scottish First Minister Nicola Sturgeon promised to do whatever it took to keep strongly pro-EU Scotland in the bloc, including potentially vetoing legislation on a British exit from the world’s biggest single market.

But French President Francois Hollande (奧朗德) declared there was no going back on Brexit.

“What was once unthinkable has become irreversible after the vote of a majority of the British people,” he said during the inauguration of a World War II memorial in central France.

Hollande called for France (法國) and Germany (德國) to use their strong friendship to seize the initiative, warning that “separated, we run the risk of divisions, dissension and quarrels”.

British exit from EU: the pros and cons
https://goo.gl/VVTlSE