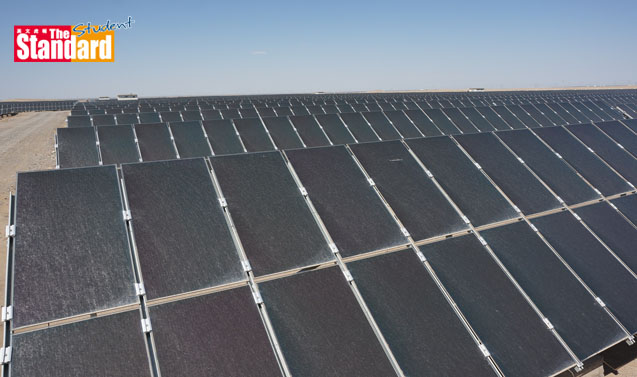 Solar Impulse 2 (Si2, 太陽脈衝二號) took off from Abu Dhabi (阿布扎比) in the United Arab Emirates (阿拉伯聯合酋長國) en route to the Omani (阿曼) capital Muscat (馬斯喀特) at the start of a five-month journey of 35,000km organised to focus the world’s attention on sustainable energy.

“Solar Impulse wants to mobilise public enthusiasm in favour of technologies that will allow decreased dependence on fossil fuels, and induce positive emotions about renewable energies,” explained the mission website, which maps out the plane’s location and broadcasts audio from the cockpit in real time.

The plane has a wingspan of 72m, as wide as the largest passenger airliner, and is powered by more than 17,000 solar cells built into the wings.

The lightweight carbon fibre aircraft weighs only 2.3 tons, about the same as a family car and less than one percent of the weight of the Airbus A380.

Studies, design and construction took 12 years and a first version of the craft, rolled out in 2009, broke records for heights and distances travelled by a manned solar plane.

The Si2 is the first solar-powered aircraft able to stay aloft for several days and nights.

Its journey will span approximately 25 flight days broken up into 12 legs at speeds between 50 and 100km per hour.

The flight will make stopovers in India (印度), Burma (緬甸) and China before crossing the Pacific Ocean (太平洋) and flying across the United States and southern Europe (南歐) to arrive back in Abu Dhabi.

“Miracles can be achieved with renewables such as solar power,” Swiss pilot Bertrand Piccard (皮卡德), who also made the first non-stop circumnavigation of the globe in a balloon in 1999, said earlier this year.

Si2 completed the first leg and took off from Muscat on Tuesday morning for its second leg, landing in Ahmedabad in India at 11.24pm.