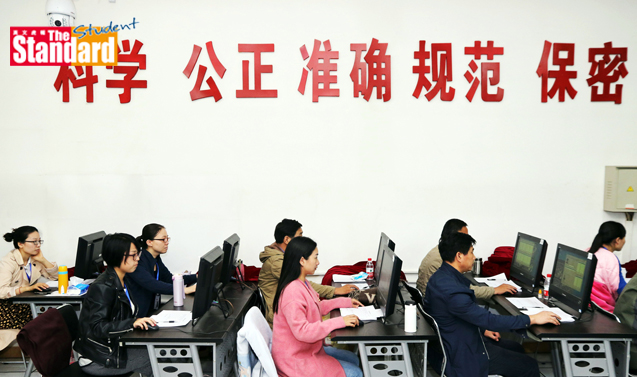 FROM sending SWAT teams (特警隊) into exam centres to arresting rule-breakers, China’s public security authorities have been cracking down hard on university entrance examination cheaters who could face jail if caught.

The exam, whose origins date back to imperial China, determines which university students will attend and what major they are able to select - and as a result, much of their future.

This year, 9.4 million high school students have taken the exam, known in China as the ‘gaokao’ (高考), competing for few places in universities, state media reported.

For the first time exam test papers this year were delivered by a police SWAT team in Beijing, (北京) and at least eight officers guarded each test centre, state media reported.

Authorities are cracking down on wireless devices and substitute exam sitters in particular, according to Xinhua.

Police in the central province of Henan (河南) nabbed nine people for selling fake exam papers, according to a local media report. Dozens of others had been caught elsewhere in the country, state media said.

Most university hopefuls sit the two-day test simultaneously across the country. Chinese, maths and a foreign language are required. For students from rural homes, the exam has been praised as a leveller of the playing field and a catalyst for social mobility.

Xiong Bingqi (熊丙奇), an expert at the country’s 21st Century Education Research Institute (21世紀教育研究院), said China would continue to hit hard against cheaters and the scams that aid them.

Why failing the gaokao was the best thing that ever happened to me
http://goo.gl/shhQPd