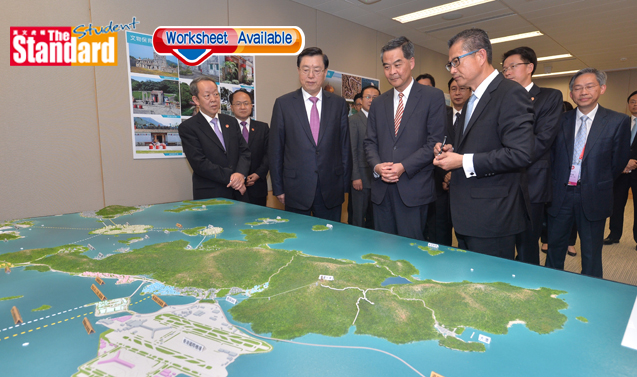 STATE leader Zhang Dejiang (張德江) said on Tuesday that he was in Hong Kong “to see, to listen and to speak” as he began a three-day visit amid unprecedented security.

That would include looking at everyday living conditions, hearing people’s views on the one country, two systems principle and speaking at the Belt and Road Summit (一帶一路高峰論壇).

He also recalled with a hint of pride his efforts in tackling severe acute respiratory syndrome when he was Guangdong party chief. But Sars went on to ravage Hong Kong in 2003, and some memories do not match those of his.

Zhang, 69, is now chairman of the National People’s Congress Standing Committee (NPCSC, 全國人民代表大會常務委員會) and ranked No 3 in the national hierarchy.

He is also the most senior leader to visit since 2012, and the tour comes amid deep concerns that the territory’s cherished freedoms are under threat.

Also in his delegation were Wang Guangya (王光亞), director of the Hong Kong and Macau Affairs Office (港澳事務辦公室), and Li Fei (李飛), deputy secretary general of the NPCSC and chairman of the Basic Law Committee (基本法委員會).

Zhang arrived on a special Air China (中國國際航空) flight from Beijing (北京) 15 minutes before noon to a red-carpet welcome, and in a short speech said he came with a “caring heart” and conveyed “warm greetings and good wishes” from President Xi Jinping (習近平).

The last time Zhang visited Hong Kong was in 2004.