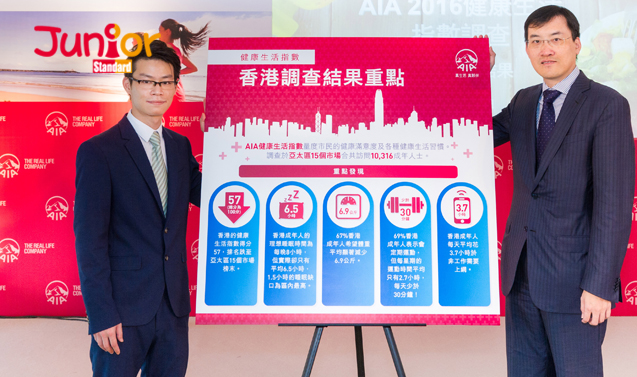 HONG Kong people think they have the poorest health in the region, according to a survey. It found that Hongkongers are the least satisfied with their health and have one of the unhealthiest lifestyles in the region.

The SAR came in last among 15 Asia-Pacific economies in the AIA poll, scoring 57 points out of 100. China ranked first, scoring 72 points, and Singapore was 11th with 61.

The Healthy Living Index (健康生活指數) takes into account individuals’ satisfaction with their own health and healthy lifestyle behavior.

Hongkongers gave themselves 6.4 out of 10 on their own health status. The regional average is 7.3.

They exercise just 2.7 hours a week, compared to the regional average of three hours. The Department of Health recommends 30 minutes a day.

Hong Kong adults want to sleep eight hours a night but got only 6.5 hours. The sleep deficit of 1.5 hours is the highest among the surveyed places. Hong Kong people do not get health check-ups, and have many misconceptions about healthy eating.

Unhealthy behaviours among Hong Kong children are ‘endemic’ with three in four parents saying their children do not get enough exercise nor sleep.

The survey found that locals on average spent 3.7 hours a day on the internet for non-work purposes.

Curiously, Hong Kong people are among the longest living in the world. Life expectancies here have steadily increased during the past 45 years up to 81.2 years for men and 87.3 years for women in 2015.

(This article is published on Junior Standard on 16 May 2016)