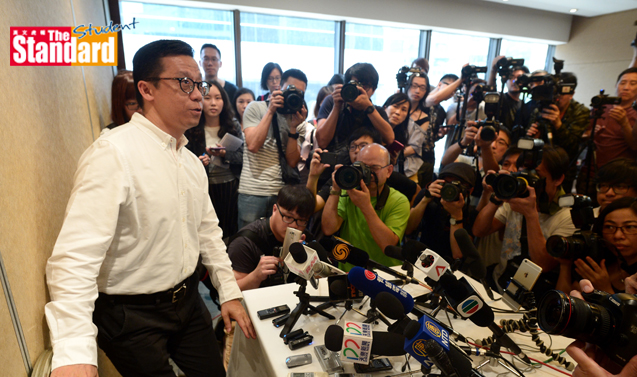 HONG Kong Television Network (香港電視網絡) founder Ricky Wong Wai-kay (王維基), whose application for a free-to-air TV licence was knocked back by the government, is considering running in September’s Legislative Council (立法會 ) elections “to get rid of the dishonest Chief Executive (行政長官) Leung Chun-ying (梁振英)”. Wong said his key manifesto will be “ABC – Anyone But CY”.

He said he will reveal his other plans in the coming weeks and make a final decision before the end of next month.

In an interview with the Chinese magazine iMoney (智富雜誌) in February, Wong said he had thought about running but changed his mind as “it was useless” to be a lawmaker.

But in a press conference on 11 May, the 54-year-old media entrepreneur said he feels that Hong Kong deserves an honest leader.

“I have only one goal if I stand for election. As a lawmaker, I hope to connect with different sectors of society and voice out to the whole world, telling them we deserve a more honest chief executive,” Wong said.

“We need to stay united if we are to bring Hong Kong out of the darkness to a bright future. I have to be responsible for my life and for the next generation.”

He said he has watched Hong Kong “sink in the past four years” and that many of his friends in various industries are unhappy with Leung.

Wong said Leung further ruined Hong Kong’s reputation in the “bag-gate” incident and that he needs to be removed to improve the trust between the people and government.

Wong did not, however, say if he will consider running for the top post himself.