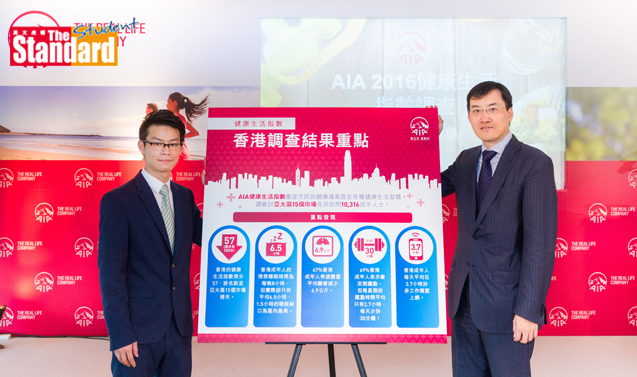 PEOPLE in Hong Kong are the least satisfied in the Asia-Pacific (亞太地區) region with their health and have one of the most unhealthy lifestyles, a survey has found.

Among 15 economies in the region, the SAR came in last, scoring 57 points out of 100 in the survey conducted by insurance giant AIA (友邦保險).

The Healthy Living Index (健康生活指數) is a composite measure that takes into account individuals’ satisfaction with their own health as well as behaviour conducive to a healthy lifestyle.

Hongkongers gave themselves 6.4 out of 10 on their own health status, lower than the regional average of 7.3.

About 74 percent felt their health is worse now than five years back.

Even though locals are well aware of what is needed to live a healthy life, their self-assessments were highly negative.

Hongkongers were also found to exercise just 2.7 hours a week, lower than the regional average of three hours and well below the 30 minutes a day recommended by the Department of Health (.生署).

Other key drivers of healthy living include eating healthily, maintaining a positive mindset and knowing how to reduce stress.

Hong Kong is one of the most connected markets in the world, with ownership of smartphones and other devices at high levels. The survey found that locals on average spent 3.7 hours a day on the internet for non-work purposes.

The survey showed that two out of three locals want to lose weight by an average of nearly seven kilograms.