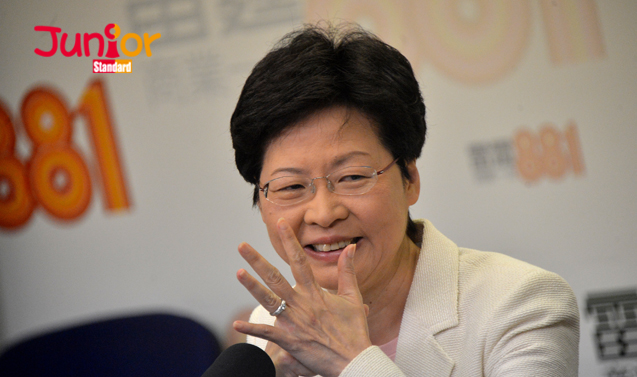 Chief Secretary for Administration Carrie Lam Cheng Yuet-ngor (政務司司長林鄭月娥) said she had been an activist as a student. She also said she felt the highest sense of achievement when she was director of social welfare.

Lam shared her ways for overcoming adversity and her aspirations for being in government over the past 36 years in a new Commercial Radio programme.

Lam’s one low point in her life was placing fourth in class for a mid-term examination. That was the one and only one time in her 13 years at St Francis Canossian School and St Francis’ Canossian College when she failed to come in top of the class.

She said being head of the Social Welfare Department could bring the most change to society, more so than a chief secretary. She was director of the department from August 2000 to October 2003.

Lam revealed she wanted to be a social worker when she was admitted to the University of Hong Kong. She was surprised to be accepted as an administrative officer in 1980, as she said she had two ‘bad records’ as a student.

She joined a sit-in protest at the government headquarters six months before joining the civil service.

She also organised a visit to Tsinghua University (清華大學) in Beijing as deputy leader of the delegation.

Lam admitted she was a student activist and “had issues with the establishment” at that time, but she chose to join the government to bring about change.

(This article is published on Junior Standard on 9 May 2016)

How to criticise constructively
http://goo.gl/54dbG3

World’s loneli...
AN elephant that has become a ...