‘One visit per week’ scheme will continue 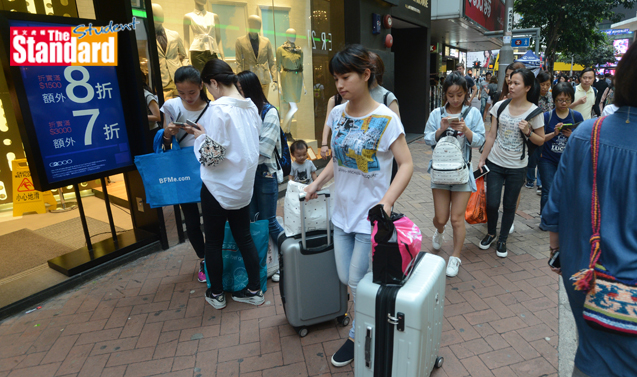 He also denied reports that he had agreed with Hong Kong Travel Agent Owners Association (旅行社東主協會 ) president Freddy Yip Hing-ning (葉慶寧) to ask Beijing to revive the multiple-entry scheme, and this time include other mainland cities as long as Hongkongers stop kicking tourists’ luggage and engage in other insulting actions.

It was only last year that the multiple-entry Individual Visit Endorsements for Shenzhen permanent residents (深圳戶籍居民一簽多行) was replaced with the ‘one trip per week’ policy, Leung said before the weekly Executive Council (行政會議) meeting on Tuesday.

He added the new policy helps reduce the number of mainlanders involved in parallel trading activities.

Leung said while the government greatly values the tourism industry’s development, it is concerned about the pressure exerted on locals whose daily lives have been affected.

“However, we object to anyone tarnishing Hong Kong’s hospitable image through uncivilised means,” he stressed.

His criticism followed Sunday’s anti-parallel trade protest in Sheung Shui (上水) that was organised by the North District Parallel Imports Concern Group (北區水貨客關注組) but had to be cancelled because of rowdy scenes.

Leung promised that the government will continue to balance Hong Kong’s tourism capacity and visitor arrivals.