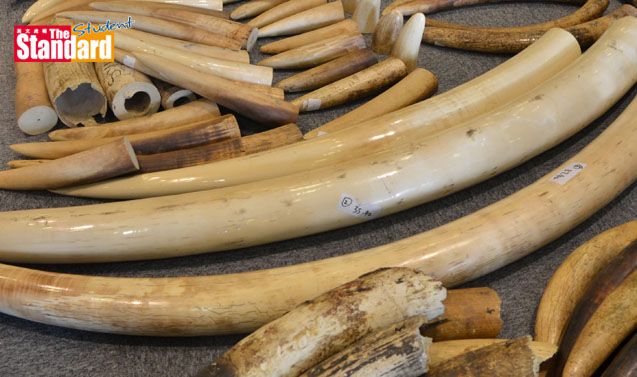 BRITAIN’S (英國) Prince William (威廉王子) urged an end to the ivory trade last Wednesday, visiting an elephant sanctuary in Yunnan (雲南) at the close of a three-day trip to China that focused partly on wildlife conservation.

William has been critical of China over its consumption of ivory, while animal rights groups say the country’s growing appetite for the contraband material has fuelled a surge in poaching in Africa (非洲).

China announced last month a one-year ban on the import of African ivory carvings, just days ahead of William’s visit.

“A powerful blow we can strike against traffickers is to reduce the demand for their products. Demand provides traffickers with their incentive. It fuels their greed, and generates their vast profits,” William said in a speech released by Britain’s royal household.

“Ultimately, ending demand for ivory is down to citizens across the world,” William said, adding that he welcomed “the steps that China has already taken” to counter the trade.

The extinction of animals such as elephants, rhinos and pangolins would be an “immeasurable loss” to humanity, he said.

William’s trip to China is the first high-level British royal visit since Queen Elizabeth (伊利沙伯女王) and her husband, Prince Philip (菲臘親王), came in 1986.

William, Queen Elizabeth’s grandson and second in line to the throne, told President Xi Jinping (習近平) that he hoped China could become a leader in protecting animals.

China crushed 6.2 tonnes of confiscated ivory early last year in its first such public destruction of any part of its stockpile. However, the country still ranks as the world’s biggest end-market for poached ivory, according to the World Wide Fund for Nature (WWF,世界自然基金會).

China signed a pact banning the global trade in ivory in 1981, but it got an exemption in 2008 to buy 62 tonnes of ivory from several African nations. It releases a portion of that stockpile each year to government-licensed ivory-carving factories.

Over 20,000 African elephants were killed for ivory in 2013, a Convention on International Trade in Endangered Species (瀕危野生動植物種國際貿易公約) monitoring programme showed, leaving a population believed to be around 500,000.