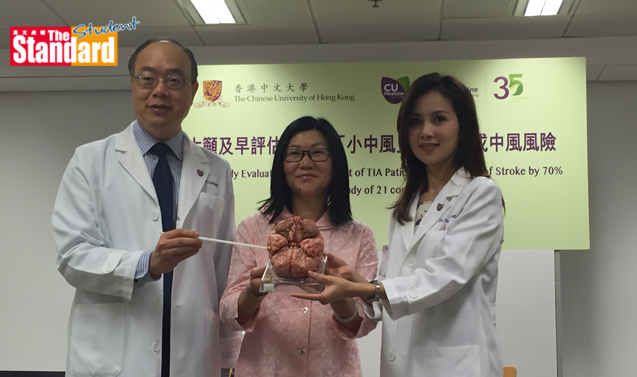 PEOPLE who suffer from a minor stroke can significantly reduce their chances of getting a full stroke by seeking treatment within 24 hours, a global study has found.

This is because the temporary symptoms of face dropping, limb numbness and speech or visual disturbance are likely to be early indications of a serious stroke.

Chinese University of Hong Kong (CUHK, 中文大學) medicine professor Lawrence Wong Ka-sing (黃家星) said these fast-passing problems may actually be symptoms of a transient ischaemic attack, or TIA, also labelled a mini-stroke, caused by a temporary blockage of blood vessels in the brain.

“Many people tend to ignore these indications as they normally disappear within minutes and at most hours,” Wong said.

But 30 percent of those who have mini-strokes subsequently develop long-term impairment or even die, he said.

“In the past, when there was no special arrangement to manage patients with minor strokes, the risk of having a stroke after a mini-stroke could be 5 percent within a week and 12 percent within three months,” Wong said, citing data from overseas reports from 2000 to 2007.

Yet according to the latest findings published in the New England Journal of Medicine (新英倫醫學期刊) with contributions from the TIA clinic at the Prince of Wales Hospital (威爾斯親王醫院 ) and 60 other specialised centres from 21 countries, appropriate treatment within 24 hours of symptoms occurring can reduce the rate of strokes by 70 percent.

Among the 4,789 mini-stroke patients studied around the world, including 139 from Hong Kong, 78 percent sought medical help within 24 hours.

Their stroke rates were 2.1 percent within one week and 3.7 percent within three months, reduced largely from the previous anticipated rates of 5 and 12 percent respectively.

What is a stroke?
https://goo.gl/LWS1CN