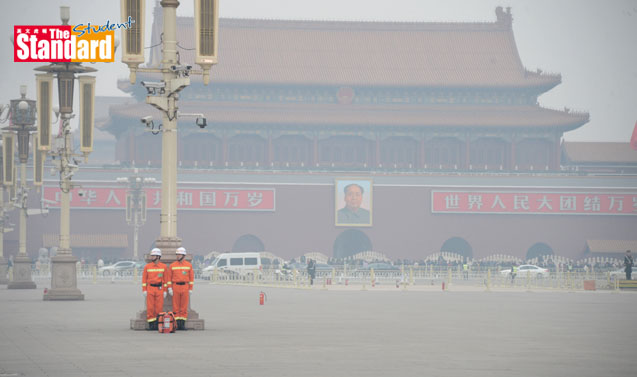 AN online documentary on China’s notorious smog has become a viral sensation, with more than 155 million views just one day after it was released, state media said.

Under the Dome, a documentary privately produced by Chai Jing (柴靜), a former anchor with state broadcaster China Central Television (CCTV, 中國中央電視台), details the causes of atmospheric pollution in the country.

The 103-minute film was first uploaded on domestic websites on Saturday and had been viewed more than 155 million times a day later, the Global Times (環球時報) said.

It includes interviews with officials from London (倫敦) and Los Angeles (洛杉磯 ), two formerly heavily polluted cities, on how they had sought to control the problem.

China’s cities are often hit by heavy pollution, blamed on coal-burning by power stations and industries, as well as vehicle use. It has become a major source of popular discontent with the ruling Communist Party (共產黨), leading the government to declare a ‘war on pollution’ and vowing to reduce the proportion of energy derived from fossil fuels.

The documentary set off a firestorm of criticism over the government’s failure to act on the issue in a timely and effective manner.

“The government needs to be pushed for more action and the people need to have their awareness raised about what they can do to fight against pollution,” the China Daily (中國日報) said in an editorial.

Chen Jining (陳吉寧), who was appointed as minister of environment protection last week, said he watched the entire video and that it should “encourage efforts by individuals to improve air quality”, according to the newspaper.

Internet users voiced strong support for Chai. “I shall avoid driving as much as possible and instead use public transport,” said a poster on Sina Weibo. “Every small move to protect the environment will converge into enormous energy and bring us back blue sky.”

Another user said, “In-depth investigation of smog was ... out of reach of the public but now it is different. We have to ... borrow the strength of the internet to arouse Chinese people’s awareness of environmental protection and force the sleeping political system to awake.”