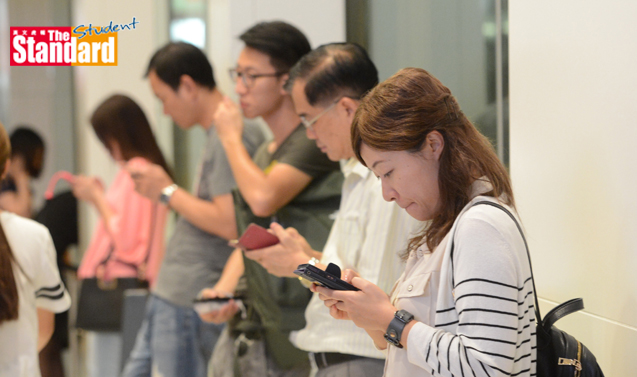 LOCALS have grown so attached to their smartphones that the possibility of them being broken is more stressful than public speaking, a study by the University of Hong Kong (香港大學) found.

It could be the first time that research has established smartphones as a major contributor to stress levels, said lead researcher Tseng Chia-huei (曾加蕙), an assistant professor of psychology.

“Of all the tests, dropping your smartphone emerged as most stressful and produced the most drastic physiological changes of all the measures,” she said. Fifty-two people who had smartphones were chosen for the experiment.

Tseng said the results were surprising to the team, as they thought that public speaking would be more stressful than seeing one’s phone dropped. Public speaking is used in many psychological studies to evoke anxiety, she said.

Each individual was asked to perform four tasks: listening to a speech in a noisy environment before being tested on its content; detecting six differences between two photos in a minute when there were actually only five; commenting on a one-minute video in front of strangers; and seeing their “phone” dropped soon after being asked to hand it over. The phones dropped were dummy ones of the same model owned by the test subjects, who were then shown cracked screens.

Each subject was attached to a biological feedback system that measured pulse rate, heartbeat, respiration and cortisol concentration levels during each of the four tasks.

Tseng said the individuals also thought they were more tense when they were asked to talk in front of strangers, when asked two weeks after the experiment.

“What they don’t know is their body didn’t think so,” she said. “During the experiment a lot of people froze when they thought their phones were broken,” she said.