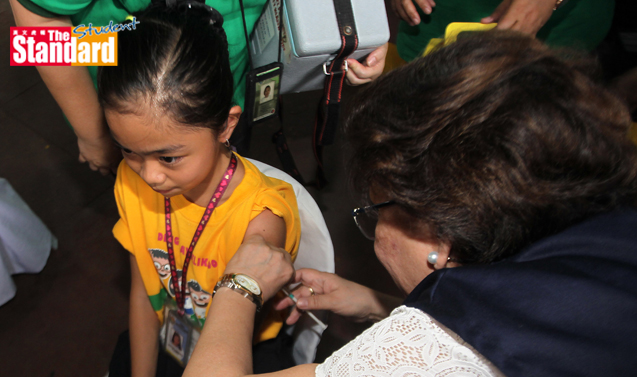 HEALTH authorities say they will concentrate on mosquito control while rejecting the use of the world’s first dengue vaccine for now.

This comes a day after the World Health Organisation (世界衛生組織) gave its backing to the first approved dengue vaccine now being used in the Philippines (菲律賓) in a national child immunisation programme and said it should be considered for use in places hit badly by the mosquito-borne disease.

The Philippines launched a pilot scheme earlier this month to immunise one million children at 6,000 government schools in provinces deemed to be at risk. It is using Dengvaxia, developed by the French-based Sanofi-Pasteur.

Joselito Sta Ana, the head of the dengue vaccine launch for Asia Pacific (亞太地區) at Sanofi, told The Standard: “In Hong Kong, there are mainly imported cases.

“But we are in contact with health authorities on how we can submit and register the product in Hong Kong.”

Sta Ana said that in China the disease is endemic only in the Guangdong (廣東) area, which has the Aedes Aegypti mosquito, the primary vector of dengue and Zika whereas Hong Kong has the Aedes albopictus, a secondary dengue vector in Asia (亞洲).

Guangdong health authorities reported a total of 791 dengue cases in 15 cities in the province in September last year.

Hong Kong has seen at least two local outbreaks in 2002 and 2014 but those did not constitute endemic cases.

Dengvaxia is not currently registered in Hong Kong, a spokeswoman for the Department of Health (.生署) said. “The vaccine is not recommended in settings with low endemicity. The department will keep abreast of the latest development of the vaccine and review its potential application in Hong Kong as appropriate,” the spokeswoman added.