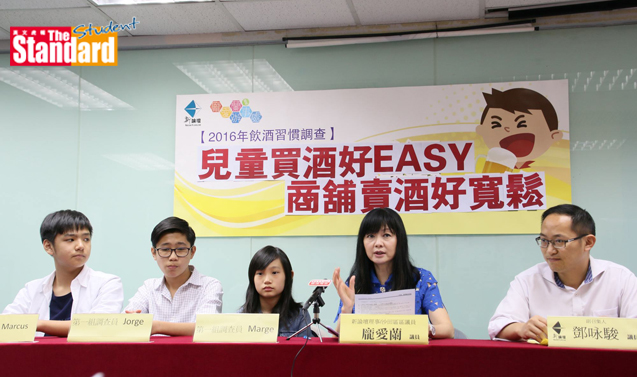 CHILDREN as young as 10 are able to buy alcohol from retail stores with little difficulty, a district councillor has claimed.

They were able to buy alcohol with a success rate of 75 percent.

The two youngsters were only questioned in one of the nine outlets that sold them beer about why they were buying alcohol. They said they were getting it for their grandfather.

“This simple undercover test showed that children who obviously look very young had a 75 percent success rate in buying alcohol in these shops,” Pong said.

She said the government should legalise penalties on convenience stores and supermarkets that sell alcohol to children under 18 as the industry’s current self-regulatory conduct is failing.

“The World Health Organisation (世界.生組織) has advised that children should not be allowed to consume alcohol at such a young age as it would have an adverse health impact and will also affect their behaviour, so the government really should step up on restricting retail shops from selling alcohol to children,” she said.