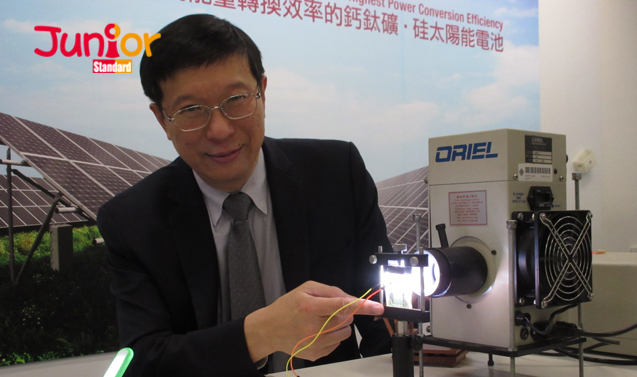 Polytechnic University (理工大學) has developed solar cells with the world’s highest power conversion efficiency. The three-year project was conducted together with the Sun Yat-sen University (中山大學) in Guangzhou and its Institute for Solar Energy (太陽能研究院).

The solar cell combines the use of perovskite (鈣鈦礦) and silicon (硅). The two materials can absorb sunlight of different wavelengths, increasing the conversion efficiency of the solar cell. The new material is lighter and at least 30 percent cheaper than the materials that are used in current solar cells.

He said silicon can absorb sunlight with a longer wavelength, while perovskite can absorb those with shorter wavelengths. This can increase the solar cell’s conversion efficiency, up to 25.5 percent, compared with only 3.8 percent from when they first appeared in 2009.

However, Surya said there are still some limitations with the perovskite solar cells. As the surface of the cell is not smooth, the sunlight will be scattered, he said. The team used three layers to maximise efficiency.

The lifespan of the cell is around 4,000 hours – the longest lifespan of solar cells that he knows. But there needs to be improvements and it will take “at least a few years” before it can be put on the market.

(This article is published on Junior Standard on 19 April 2016)

How do solar cells work
http://goo.gl/fqI8Yh