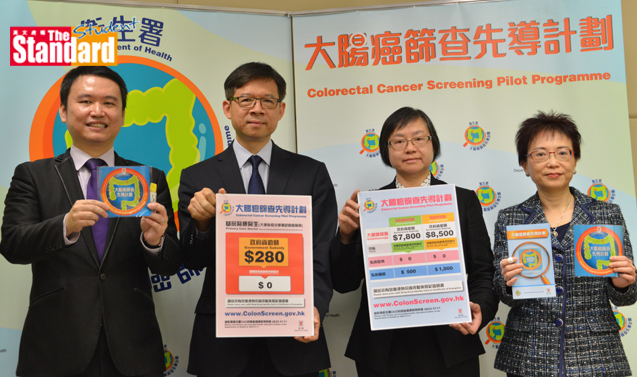 HONG Kong’s fight against its biggest cancer killer will start in earnest from September, as private doctors started signing up for a HK$420m, three-year programme that could potentially save the lives of more than 300 people for as little as HK$280.

The three-year colorectal cancer screening programme is expected to see 300,000 people aged 61 to 70 getting tested and treated through government subsidies of up to HK$8,500.

Centre for Health Protection (CHP, 衛生防護中心 ) controller Leung Ting-hung (梁挺雄) said 50,000 residents – those born between 1946 and 1955 – will first visit a private general practitioner enrolled in the programme to undergo a faecal immunochemical test.

The government will subsidise the test for HK$280; a second test also will be subsidised at the same amount if the first is positive.

Those who need a colonoscopy will have a fixed amount subsidy of HK$7,800 if they do not need removal of abnormal polyps and HK$8,500 with polyp removal.

The colonoscopy specialist may charge a payment not exceeding HK$1,000 on top of the subsidy.

“Polyps that turn into cancer often shed tiny amounts of blood not visible to the naked eye, but can be picked up by a sensitive stool test,” Leung said, adding the test can reduce colorectal cancer mortality by 15 to 33 percent.

CHP Surveillance and Epidemiology Branch (監測及流行病學處) head Regina Ching Cheuk-tuen (程卓端) said 4.5 to 5 percent of those taking the faecal test will be diagnosed with colorectal cancer. So, 313 colorectal cancer cases are expected to be discovered by the programme.

What is Colorectal Cancer?
https://goo.gl/jfjGxG