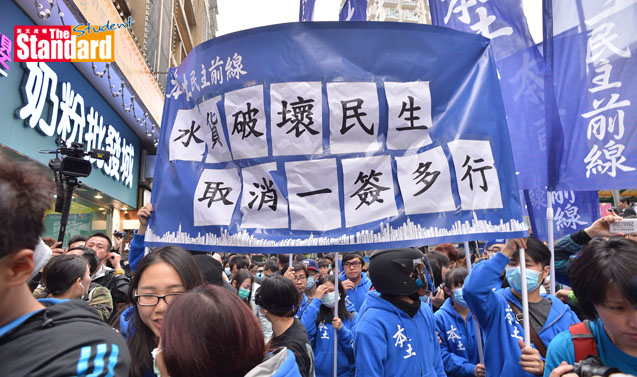 VIOLENCE erupted in Yuen Long (元朗) on Sunday over the cross-border shopping business – the worst violence yet over the issue that saw police using pepper spray six times and arresting 33 people.

By 10.30pm, dozens of protesters remained in the protest zones.

Besides the pepper-spraying action, police were in the fray with batons as the rally turned ugly in the afternoon.

The 33 people arrested, whose ages ranged from 13 to 74, were accused of possessing offensive weapons, assaults on police and indecent assault.

Hong Kong Indigenous protesters clad in blue and Civic Passion members in yellow, who were kitted out with masks and helmets, want the cancellation of multiple-entry permits for mainlanders.

Yuen Long residents made up the majority of people opposing them.

‘Recover Yuen Long’ (光復元朗) was the most serious of three rounds of protest over the past four weeks that also took place in Tuen Mun (屯門) and Sha Tin (沙田). Sunday’s action started at 3.30pm at Long Ping Station (朗屏站) and was declared over at 4pm in Sau Fu Street (壽富街).

The radical groups then began to move, but chaos soon replaced an orderly dispersal.

A group against the anti-shopping elements shouted foul language at their rivals and punches began to be thrown.

Several people were taken away by the police, including a woman who had blood streaming down her face.

“I believe it was an accident,” he said.

Lau condemned the actions of protestors who “quarrelled, threw objects and rushed to the road”.