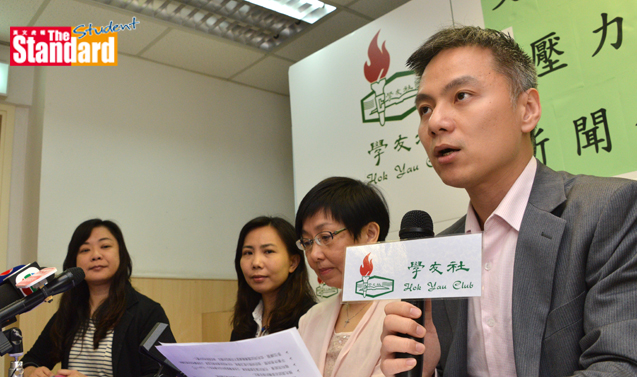 ONE in seven Hong Kong Diploma of Secondary Education Examination (HKDSE, 中學文憑考試) students says he or she is facing “unbearable” pressure because of insufficient time and uncertainties about the future.

The students were asked to rate the pressure brought about by the HKDSE on a scale of zero to 10. The average result was 6.99, a slight increase from last year’s 6.83.

The survey also found that Chinese language, English language, mathematics and Liberal Studies remained the four hardest subjects, with ratings ranging from 6.28 to 7.21.

Tests on these four major subjects started on 5 April.

Around 45 percent of the students said their parents had given them pressure. Of these, 54 percent thought the pressure was normal and 25 percent said it had a positive effect on them.

“Self-expectation of students increased from last year, while competition among peers and the social atmosphere also contributed to the pressure,” said Ng Po-shing (吳寶城), the club’s Student Guidance Centre (學生輔導中心) director. He suggested students and parents should not view universities as the only way out and should have reasonable expectations.

In a separate survey by Youth New World (青年新世界), one-third of 119 HKDSE students from lower-income families interviewed said they were suffering from stomach ache, headache or insomnia.

About 80 percent said they felt nervous, irritated and anxious because of the exams.