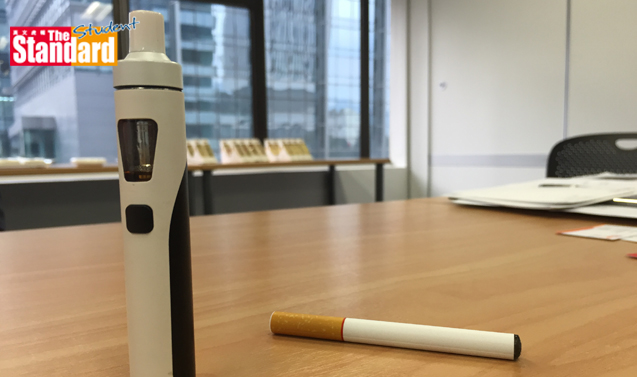 ELECTRONIC cigarettes should be regulated and not banned despite the claimed potential risk to public health, an e-cigarette trade group says.

Under the current Pharmacy and Poisons Ordinance (藥劑業及毒藥條例), if an e-cigarette contains more than 0.1 percent of nicotine, it is categorised as a Part I poison. E-cigarettes containing nicotine are considered pharmaceutical products, and subject to the ordinance on safety, quality and efficacy.

The Asian Vape Association (亞洲電子煙協會), formed by 10 e-cigarette companies in Hong Kong, claimed that a complete ban would create a black market and drive e-smokers back to conventional cigarettes.

The group is calling for a “balanced” regulatory approach, such as prohibiting sales to minors, imposing quality control standards, and ensuring that any information on reduced risks is substantiated.

“E-cigarettes are devices that do not contain tobacco leaf and have the ability to reduce the harm to smokers caused through heating and vaporising a liquid solution,” association chairman Nav Lalji said.

Quoting a survey by a research company, Ipsos, from May to June last year, Lalji said nearly nine in 10 adult smokers agreed they should have access to products that are scientifically proven to reduce smoking.

The survey polled 414 Hongkongers aged over 18. Of these 66 percent said they would consider switching if e-cigarettes were legal, met quality and safety standards, and were readily available.

Asked if he recognised that e-cigarettes are somehow harmful to health, Lalji said: “There may or may not be potential risks. But it is definitely less than the [traditional] cigarettes.”