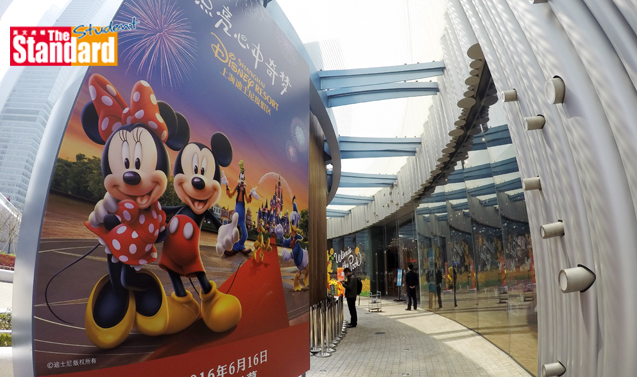 TICKET sales for Shanghai Disneyland (上海迪士尼樂園) have had a chaotic start. Tickets for the theme park’s opening day on 16 June appeared to have sold out on its official sales website within hours on 28 March.

All was not running smoothly, with website glitchesclouding the ticketing picture.

At one point it appeared that all tickets until mid-September had been snapped up. Then a Standard reporter was able to book an opening-day ticket in the afternoon.

The system, however, had another glitch in the evening when a ticket could be selected but not checked out.

Instead came the message: “Sorry, but the tickets you requested are no longer available. Please make new selections.”

To add to the confusion, a Bloomberg (彭博新聞社) report said tickets from 17 June to 30 September remained available.

So the day after, people were still trying to figure out the situation. Covering 3.89 square kilometres, Disney’s sixth park worldwide is three times the size of Hong Kong Disneyland, with non-peak tickets costing about 20 percent less.

A ticket for the first two weeks, which are regarded as peak periods, costs 499 yuan (HK$597). The average price will be 370 yuan.

Tickets went on sale at 12.01 am on 28 March through the park’s official website and outlets including travel booking website Alitrip (阿里旅行). But mainland news website The Paper (澎湃新聞) reported that sales on Alitrip started 10 minutes before the official start, with some 7,600 tickets for 16 June sold early.

Shanghai Disneyland responded through its Weibo (微博) account afternoon, saying the ticket system had suffered “intermittent errors” but normal service had been restored.