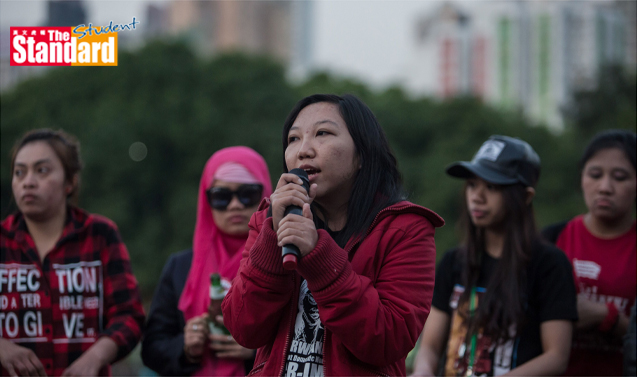 VISITING Hong Kong for the launch of a documentary about her case and the plight of other maids in the city, Erwiana Sulistyaningsih broke down in tears in front of the audience of mostly Indonesian women as she spoke of her ongoing frustration.

“I hear stories of abuse, cheating and exploitation by recruitment agencies, many different cases, and not just women,” Erwiana, 25, said.

After pictures of her extensive injuries went viral in 2014, the young Indonesian became the face of a movement determined to force change for the more than 300,000 foreign domestic workers in Hong Kong.

Although she never admitted her guilt, employer Law Wan-tung (羅允彤) was jailed for six years, a triumph for soft-spoken Erwiana who was held up as a heroine.

Both she and migrant rights campaigners hoped the high-profile case would bring enough pressure on authorities in Hong Kong and Indonesia to improve conditions for migrant domestic workers.

A year on, they say it has not.

“We haven’t seen any changes yet. There are still so many cases of migrants who never get justice,” said Erwiana who is now studying economics and business in her homeland.

Most of Hong Kong’s foreign domestic workers are from Indonesia and the Philippines.

Erwiana and fellow campaigners say the maids’ homelands and the countries they work in must clamp down on private recruitment agencies that extract exorbitant fees, plunging the workers into debt before they even start their jobs.

Their passports are routinely kept by their agencies or employers, to stop them from running away.

Abolition of the hated ‘live-in’ rule in Hong Kong, which forces migrant domestic workers to live with their employers, making it almost impossible to escape abusive households, is another key demand.

Campaigners have argued these points repeatedly, even before Erwiana’s case, but they have fallen on deaf ears with authorities.