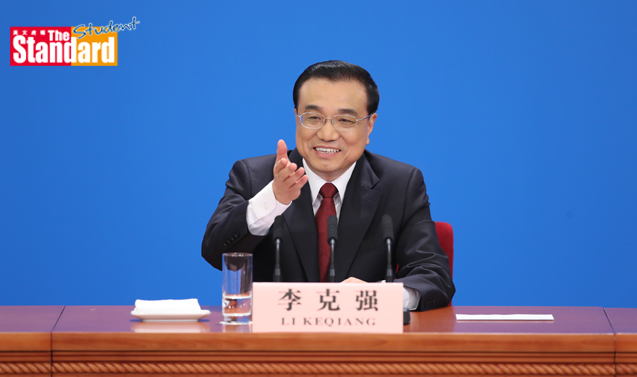 PREMIER Li Keqiang (李克強) has given Hong Kong his vote of confidence, saying its people have the wisdom to handle the SAR’s problems on their own in the wake of the Mong Kok (旺角) clashes.

The mild stance contrasted sharply with that of Chief Executive (行政長官) Leung Chun-ying (梁振英), who labelled the Lunar New Year melee as a ‘riot’. Other officials called for legislating Article 23, the controversial national security law.

At a press conference on 16 March after the closing ceremony of the annual National People’s Congress (全國人民代表大會 ) in Beijing (北京), the premier said: “The central government’s policies of ‘one country, two systems,’ ‘Hong Kong people administering Hong Kong’ and ‘granting Hong Kong a high degree of autonomy’ have not and will not be changed.”

When asked about Hong Kong’s future, Li guaranteed that the SAR will maintain its long-term prosperity and stability.

“We believe that the SAR government has the ability and that Hong Kong people have the wisdom to handle the complex issues in Hong Kong,” Li said.
He added that Hong Kong’s development ultimately comes down to the efforts of the people.

“As a developed economy, it is not bad that Hong Kong achieved 2.4 percent economic growth last year,” he said, but stressed that the SAR should make better use of its strengths and seize the opportunities offered by mainland development.

He reconfirmed that the mainland government is striving to launch the Shenzhen-Hong Kong stock connect (深港通 ) this year.

Li said Beijing will fully support any proposals from the SAR government that help maintain long-term stability and prosperity.