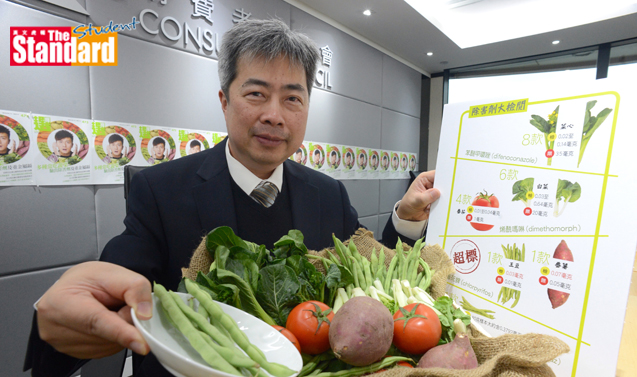 The Consumer Council (消費者委員會) has warned that about a third of the so-called organic food sold in Hong Kong contains pesticide residue, some to the extent that could damage your nervous system.

The watchdog said it found 300 pesticide residues and seven heavy metals in 127 vegetable samples such as French beans, purple sweet potatoes and tomatoes.

It said 28 (37 percent) of the 75 samples that claimed to be organic contained pesticide residue.

One sample of French beans imported from the mainland contained chlorpyrifos at a level of 0.03milligram per kilogram – 0.02mg more than the permitted limit of 0.01mg.

The sample also contained another five types of pesticide residues, including prochloraz at a level of 4.74mg/kg.

“A 60kg adult eating 80g of the sample each time for two meals a day would have taken in prochloraz above the acceptable daily intake, posing damage to his or her health,” said council vice chairman Philip Leung Kwong-hon (梁光漢).

It is understood that chlorpyrifos is used to kill cockroaches, mosquitoes and flies.

Exposure to small amounts of chlorpyrifos can cause a runny nose, tears and increased saliva or drooling and lead to unconsciousness, loss of bladder and bowel control, convulsions, difficulty in breathing, and paralysis.