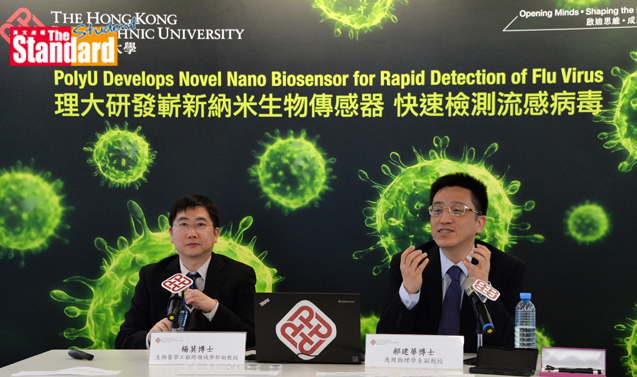 HONG Kong Polytechnic University (香港理工大學 ) researchers have developed a faster and cheaper test for flu, which they say could also be used for Ebola
and Zika.

The technique produces results in about three hours after putting a drop of saliva into an analytical device. That is faster than an existing test which takes at least a day.

The new method would be able to identify flu in patients with just mild symptoms, the researchers said, allowing hospitals to treat the patients earlier and save lives.

The test costs HK$20, which is 80 percent cheaper than existing ones.

The technology has been successfully conducted in the laboratory on the H7 flu strain and Ebola saliva samples.

Researchers are now conducting tests on the H1N1 and H5N1 human flu, and plan to extend it to cover the Zika virus.

Yang Mo (楊莫), associate professor in the interdisciplinary division of biomedical engineering, said: “Each virus has a unique genetic sequence. A complementary probe can be designed once the sequence is known. Therefore theoretically the test can be applied to different types of viruses and can be detected by modifying the capture probe.”

But he added that the test will not be able to detect unknown viruses.

The research team has now improved the accuracy of the test to 10 times.

“We hope that it will be used for clinical purposes in two years’ time,” Yang said.