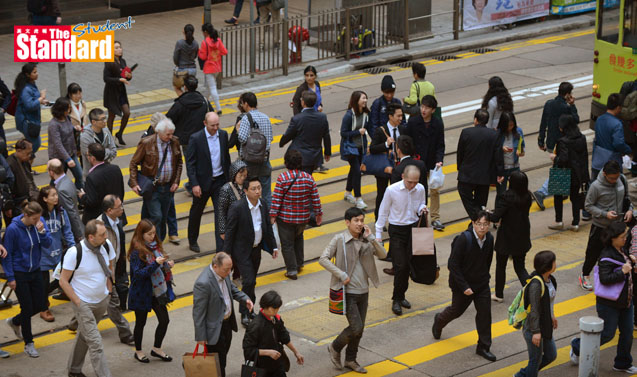 “While I absolutely respect the chief executive’s opinion, we have different ideas, probably because we grew up in different backgrounds,” Tsang said. “You know that I grew up mainly outside of Hong Kong. We have different experiences. But I believe we have the same objectives.”

Tsang added, “Having developed for more than a century, Hong Kong ranks in the top tier globally for its economic success. However, behind and beyond material fulfilment, the people of this city, our younger generations in particular, are hungering for spiritual contentment. This is what a mature society should manifest.”

Tsang said conflicts should be resolved through conversation rather than confrontation, a soft tune compared to Leung’s attack on the students and their magazine Undergrad (學苑).

Probably as a consequence, the government plans to increase spending on education by a whopping HK$3.9 billion to HK$79.3 billion, the biggest slice of government expenditure.

About HK$71.4 billion will be recurrent, accounting for 22 percent of total recurrent expenditure.

In tertiary education, the intake places of senior-year undergraduates in government-funded universities will be progressively raised from 4,000 to 5,000 per annum in the 2018-19 academic year.

Some HK$475 million will be spent on these places.

Simultaneously, more young people will be able to enjoy government support in studying for bachelor degrees.

Parents with children in kindergartens will also benefit, as the voucher value in the Pre-primary Education Voucher Scheme (學前教育學券計劃) will increase by HK$2,500 in the 2015-16 school year.

The financial secretary said the HK$63 billion surplus this fiscal year was “special” as it was boosted considerably by HK$30 billion from the double stamp duty.