Three-day wait for bed in ward 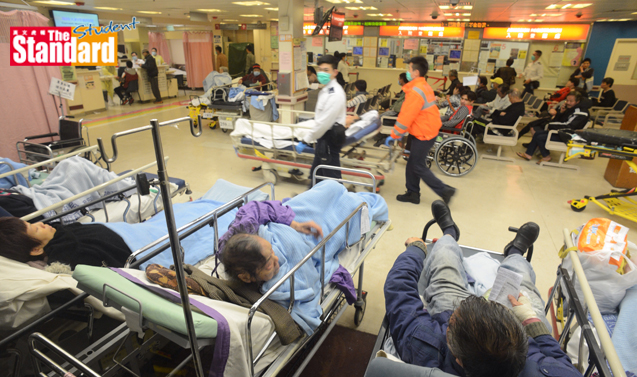 PEOPLE in emergency situations needing to be admitted to public hospitals face long waits before going into a ward, even amid a surge of influenza cases.

According to a Facebook post by a member of an accident and emergency department that went viral on Tuesday, some patients waited three nights before admission to a ward.

The person who made the claim wrote that a member of a patient’s family asked how long the wait would be. “I answered the longest wait has been three nights.”

It was “ridiculous”, added the medical officer, who had been on duty in an observation ward at the A&E department. About 50 people were at that time queuing for admission to wards.

Patients waiting for admission also had to sleep on folding beds so small they could not turn. Two lacked any bed and had to sit in wheelchairs.

“When it was meal time, an elderly woman straightened her body and fed herself,” the staff member added. “I felt like crying at that moment.”

It seemed Hong Kong was doomed, pouring money into a third runway at the airport and the express rail instead of hospitals, the writer said.
The post was shared thousands of times on Facebook, while others had their own stories.

One recounted 13 hours in a wheelchair in an A&E department, then three hours on a temporary bed before admission. Another told of a sign at Queen Elizabeth Hospital’s (伊利沙伯醫院) A&E department stating that waiting time for admission to a medical ward on Tuesday was more than 24 hours. So patience was required of patients.

My Health, My Choice
http://goo.gl/6m1lzN