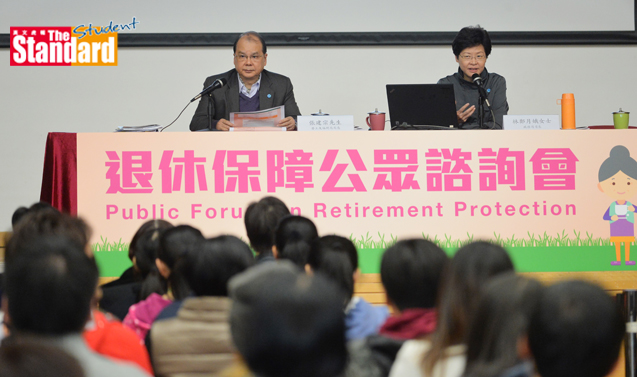 CHIEF Secretary Carrie Lam Cheng Yuet-ngor (林鄭月娥) says some people pushing for a government-run universal pension scheme will claim she lacks humanity, but the fact is that it is impossible to please everyone.

At a retirement protection forum held by the Business and Professionals Federation of Hong Kong (香港工商專業聯會) on 2 March, Lam pointed out that she had been criticised by radical activists, unionists and business interests, which could make her seem “inhuman” in some people’s thinking.

“We seem to have pleased nobody,” Lam said. “My colleague, Secretary for Labour and Welfare (勞工及福利局局長) Matthew [Cheung Kin-chung, 張建宗], once described our situation as not being human on both sides. I would say it’s worse – not being human on every side.”

She said having come through the civil service system she was not trained to please people but rather to work for the greater good of Hong Kong.

Lam also insisted that a universal pension scheme would hurt the city’s competitiveness and place a heavy financial burden on its citizens.

She urged the public not to lose sight of the big picture in retirement protection amid a rapidly ageing society, which means there will be a smaller workforce to support an increased number of retirees.

One is a scheme that would provide a pension to all retirees regardless of their assets. That would cost HK$56.3 billion by 2064.

Another is a scheme only for those in financial need. That would cost HK$6 billion. Single people with assets of less than HK$80,000 or couples with less than HK$125,000 could qualify.

Firms urged to ...
THE government should try cash...