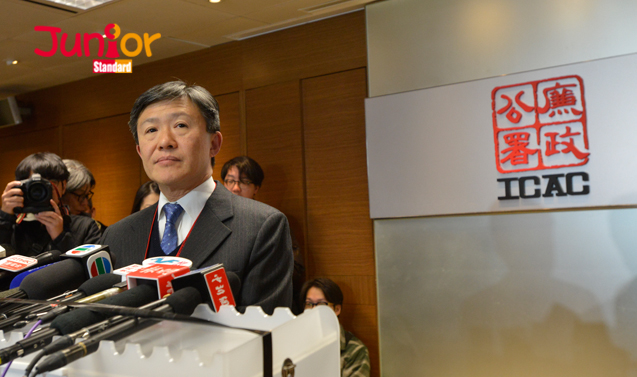 The Independent Commission Against Corruption (廉政公署) has investigated about 10 staff in connection with the alleged excesses of former commissioner Timothy Tong Hin-ming (湯顯明).

Current ICAC comissioner Simon Peh Yunlu (廉政專員白韞六) said directorate officers are included in the disciplinary probe and that some had already left the organisation.

“Rules are rules. We have to abide by the rules. The results of the investigation will not be made public. The investigation is expected to be completed in the first half of this year,” Peh told a media reception.

He said the probe, conducted by a special investigation unit set up in 2013 and led by himself, is ongoing. Those who resigned have been invited to provide information, he said.

Peh admitted it was difficult to reclaim the gratuities given to retired staff.

The internal investigation followed an announcement by the Department of Justice (律政司) in January that Tong will not face criminal prosecution for misconduct in public office, or any other offence, in connection to his lavish expenditure.

An investigation began in 2013 when the ICAC received complaints against Tong, who was commissioner from 2007 to 2012.

The accusations included using public funds for entertainment and overseas duty trips, the acceptance and the offering of gifts, and the employment of a mainland academic.

(This article is published on Junior Standard on 1 March 2016)