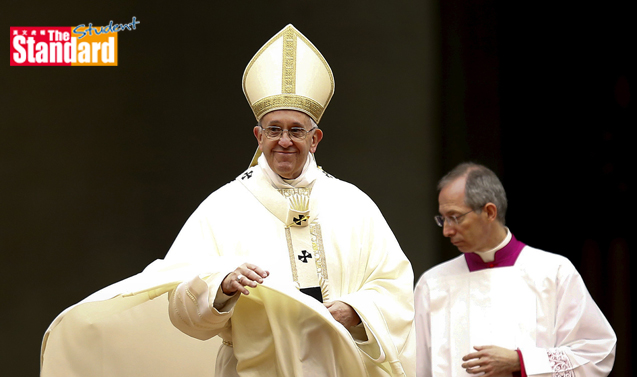 China said on Wednesday it had “noted” an interview in which Pope Francis (教宗方濟各) sent Lunar New Year greetings to President Xi Jinping (習近平), and called on the Vatican (梵蒂岡) to be flexible in creating conditions for better relations.

The Vatican, which has had no formal diplomatic ties with Beijing (北京市) ever since after the Chinese Communist Party (共產黨) took power in 1949, has been trying to improve ties with China and its state-sanctioned Catholic Church (天主教會).

The main point of contention between Beijing and the Vatican is which side should have the final say in the appointment of bishops. Another stumbling block is the Catholic Church’s recognition of Taiwan (台灣), which Beijing considers a renegade province.

While he was in South Korea (南韓) in 2014, the Pope urged China to pursue a formal dialogue to benefit both sides. While flying to South Korea, his plane was allowed to cross Chinese air space, a first for a pope.

In the interview in the Asia Times (亞洲時報) this week, the Pope did not mention difficult subjects like human rights, expressing his admiration for China and sending his best wishes to Xi and China’s people ahead of next week’s Lunar New Year holiday.

“China has always been sincere about improving Sino-Vatican ties, and have made many efforts in this regard,” Lu told a daily news briefing.

“… We also hope that the Vatican can take a flexible, pragmatic attitude to creating conditions for improving ties.”

A 90-second review of the changes Francis has brought to the papacy
http://goo.gl/dI6fop