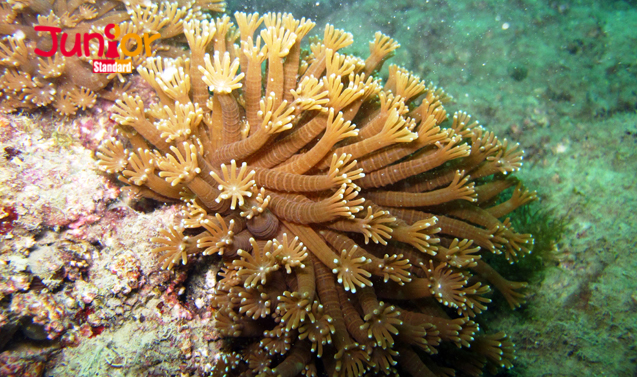 The culprits, it said, are algae and sea urchins.

Professional Commons member Paul Hodgson said there has been an unprecedented increase in sea urchins. He said the number of urchins has gone up 50 times – from 20 to more than 1,000 per 400 square metres. “Urchins eat algae on corals, like eating peanut butter on bread,” he said.

Such “bio-erosion” is believed to be related to the reintroduction of farming and forest clearance.

Forest clearance was conducted for surveying after the Town Planning Board (城市規劃委員會) published the draft outline zoning plan for Pak Sha O (白沙澳), a Hakka village in Sai Kung Country Park. The zoning plan will make more land available for farming and for developers to build houses.

Professional Commons said it will object when the draft outline zoning plan is introduced for consultation.

It also called for immediate action by the Agriculture, Fisheries and Conservation Department (漁護署) to reintroduce coral and control the urchins. Professional Commons chairman Stanley Ng Wing-fai (吳永輝) urged the Town Planning Board to change Hoi Ha and Pak Sha O to a joint conservation area.

(This article is published on Junior Standard on 3 February 2016)