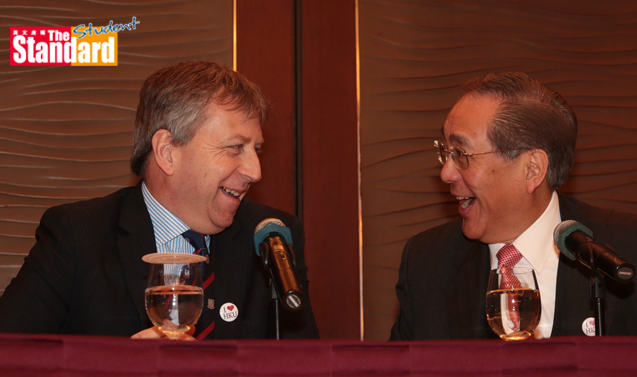 A PROPOSED meeting between the new chairman of the University of Hong Kong Council, Arthur Li Kwok-cheung (李國章), and students may fall by the wayside. This comes after the students slammed as “inflammatory” Li’s allegations that the Civic Party had manipulated protesters whom he accused of acting like they had “taken drugs” when they besieged an HKU building on 26 January.

Yvonne Leung Lai-kwok (梁麗幗), a member of the university’s Students’ Strike Organising Committee (香港大學罷課委員會), claimed that Li was trying to deviate public focus away from HKU and smear the students.

“Undoubtedly, it has damaged the whole foundation of dialogue,” she said. Leung also rebutted Li’s accusation that she was being manipulated by the Civic Party (公民黨).

Leung was an intern with the Civic Party. “I had my internship in Alan Leong Kah-kit’s (梁家傑) office four years ago when I was still a secondary student,” she said.

“But it does not mean I have a deeper relationship with the party and their members.”

She said every teacher and student should have free will as “HKU is a school striving to nurture students with free will”.

She also said she felt heartbroken when she read vice chancellor Peter Mathieson’s (馬斐森) email that he could not accept mob rule. She also disagreed with the accusation that Hong Kong University Students’ Union (香港大學學生會) president Billy Fung Jing-en (馮敬恩) had lied and misled the students into besieging the council. “We cannot see that Fung told any lies,” she said.

Chief Secretary for Administration (政務司司長) Carrie Lam Cheng Yuet-ngor (林鄭月娥) said she was not clear about Li’s comments. But she added: “I felt heartbroken, I felt really heartbroken. As I saw the behaviour of the university students, I felt it was far beyond the bottom line that a civilised society can accept.”