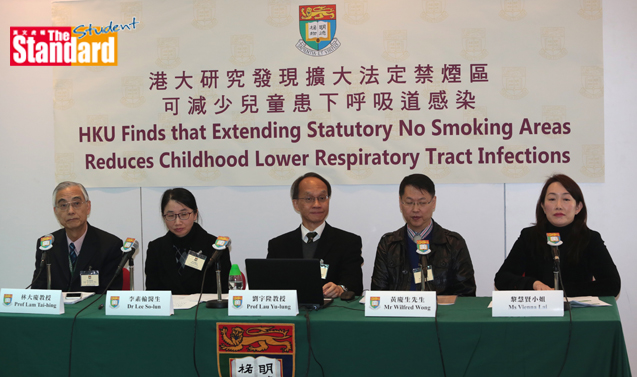 MORE than 60 percent of school-age children could avoid chest infections if there are more no-smoking areas in Hong Kong. The line is advanced by University of Hong Kong (香港大學) medical and public health academics following a research project that spanned nine years.

Youngsters under 18 are susceptible to pollutants produced by smokers, but the risk of infection could be reduced if the government extended bans on smoking.

According to Hospital Authority (醫院管理局) data, 75,870 under-18s were admitted between January 2004 and December 2012 due to diseases caused by lower respiratory tract infections (LRTI). They included serious complaints such as emphysema, pleural effusions and abscesses in the lung.

Of those admitted, 60,551 were pre-schoolers aged five or under.

Younger children are more at risk as their tracheas are thinner and immune systems weaker, researcher Lee So-lun (李素輪) said. So they are more sensitive to pollutants.

It was seen that one out of five pre-schoolers and three out of five of those from six to 18 could have avoided infections with an extension of no-smoking areas.

“We have deduced that the effect on children aged six to 18 will be more apparent as they tend to spend more time outside the home and are therefore more exposed to pollutants,” Lee said.

Although Lee said the study was limited by a difficulty in assessing time spent in various environments, the positive impact of the amended smoking ordinance that took effect in 2007 was undeniable.

Child LRTI infections fell by 47.7 percent in the year after its implementation, and there was an average 15-percent drop in the following six years. So, more than 13,000 children avoided hospital with such infections thanks to the law.