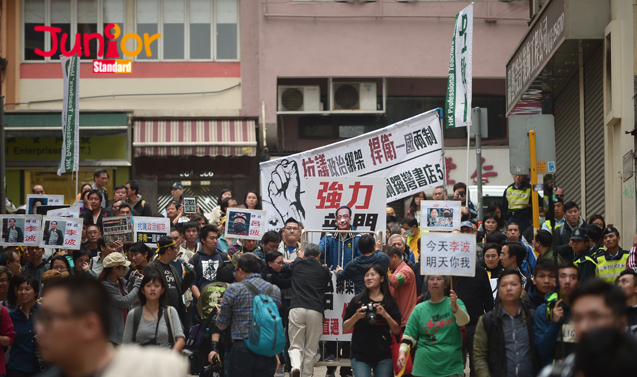 Hong Kong’s democracy took a beating last year as it dropped one place in a global ranking amid concerns about the disappearance of a bookseller.

The Economist Intelligence Unit (經濟學人智庫) released the Democracy Index 2015, which provides a snapshot of the state of democracy worldwide.The index is based on the ratings of five categories on a zero to 10 scale.

Hong Kong, categorised as a ‘flawed democracy’, scored 4.3 on electoral process and pluralism, 5.7 on functioning of government, 5.5 on political participation, but 9.4 on civil liberties and 7.5 on political culture.

With an overall score of 6.5, Hong Kong placed just 67th out of 167 countries and territories. China’s score remained “abysmal” at 3.14.

The report said the disappearance of a book publisher in Hong Kong raised concerns about the degree of control Chinese security forces have over Hong Kong and press freedom.

Richard Tsoi Yiu-cheong (蔡耀昌), vice president of the Hong Kong Alliance in Support of Patriotic Democratic Movements of China (支聯會), said: “The Lee Bo (李波) incident reveals a wide range of flaws of Hong Kong’s systems, mainly with ‘one country, two systems’, but also questions the human rights and protection in the SAR.”

But City University political scientist James Sung Lap-kung (宋立功) argued that he did not see any “direct relationship” between the Lee incident and democracy in the SAR. “I can only say if the missing incident is not carefully handled, it will create questions for personal security and freedom of speech in Hong Kong, which ultimately poses a threat to the one country, two systems principle.”

(This article is published on Junior Standard on 28 January 2016)

Democracy in an age of anxiety
http://goo.gl/GN0msI