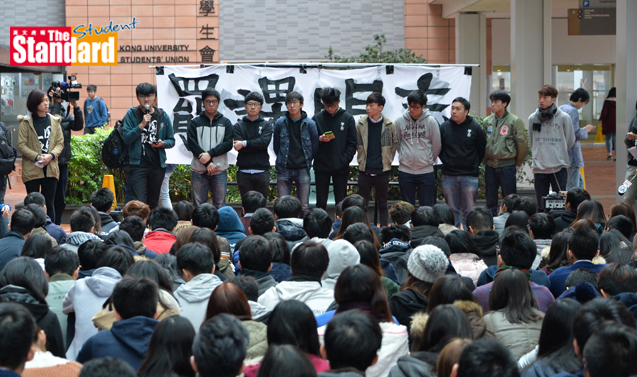 A GROUP of University of Hong Kong (HKU, 香港大學 ) students began a seven-day class strike on 20 January to protest against the institution’s governance structure.

A demonstration led by the HKU Students’ Strike Organising Committee (香港大學罷課委員會) was held at the Haking Wong Podium (黃克競平台).

Vickie Chan, one of the committee members, said it was hard to predict how many students will join the boycott.

“We are not holding a social event and there were no invitations so we cannot predict how many will join us.”

The students first read a declaration of a class strike before speakers delivered speeches about the boycott.

After the end of the demonstration, the participants started promoting the strike on campus.

Luly Lai, a Year Four student in the faculty of social sciences (社會科學院 ), will join the boycott as she disagrees with the automatic appointment of the chief executive as chancellor of all public universities.

“Institutional autonomy should be based on bottom-up consensus, instead of top-down authority,” Lai said.

Chief Executive Leung Chun-ying (梁振英) in response to the boycott reiterated the government has a role in publicly funded universities.

“The government has both power and responsibility towards universities, like two sides of a coin,” Leung said.

A spokesman said the government opposed students using a class boycott as a means of protest as it would affect universities’ operations and the daily work of teaching and research.