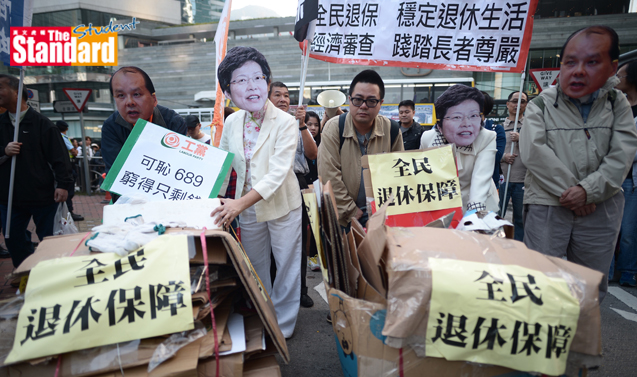 SECRETARY for Financial Services and the Treasury (財經事務及庫務局局長) Ceajer Chan Ka-keung (陳家強) says the eventual raising of taxes to pay for universal retirement protection is no empty threat. In a blog published on 3 January, Chan said the ratio of elderly people aged 65 or above would double from 15 to 30 in every 100.

Assuming the government does not increase benefits for the elderly or other social allowances, the spending on social welfare and medical expenses would still double or triple in 30 years.

The surge in the number of elderly people would put a heavy burden on public spending, and it is likely the government will find it necessary to hike taxes or introduce new kinds of taxes, Chan wrote.

By doubling profits and salaries taxes, the government would see its annual income climb by HK$169 billion, equivalent to 8 percent of the nominal GDP in 2013. That would still be insufficient to fill a fiscal gap in 2041, which is estimated to amount to between 8.6 and 21.7 percent of GDP.

“I know there are people saying that the government upholds the philosophy of a Scrooge, and it is so spiritually poor that it thinks of nothing but money. The recent public consultation on retirement protection has caused heated debates on whether the government should bear the expenses, or use its fiscal reserves,” Chan wrote.

“No matter what is the final consensus, any retirement protection plan cannot go without money. We must search for the source.”

Offering universal retirement protection would cost HK$50 billion a year, which is almost equal to how much the government spends on social welfare and medical. It would be financially unsustainable, he wrote.

When considering retirement protection, one must rationally consider their financial implications, Chan added.

Energising the ...
FROM the angle of either envir...