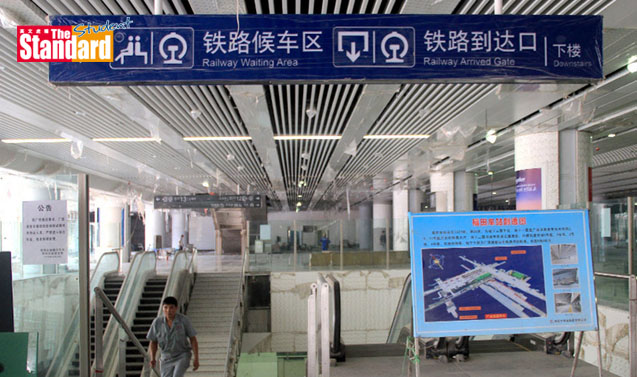 THE mainland section of the Guangzhou-Shenzhen-Hong Kong Express Rail Link (廣深港高速鐵路) was completed on Wednesday as 300 people rode the first train out of Futian station (福田站).

Northbound Hongkongers will have to stick to their old route until the SAR section is completed in the third quarter of 2018.

The maiden voyage left Futian at 8.27am for Guangzhou South station (廣州南站).

Among the passengers was a Hongkonger whose family lives in Guangzhou, where he travels to once a week.

A mainlander with a baby said she was going to Guangzhou South to change trains and continue to Guangxi (廣西) province. A similar trip by bus takes almost eight hours, twice as long as the train.

Another passenger said the Futian station is convenient as it is near Civic Centre (市民中心), an interchange station for two Shenzhen (深圳) MTR lines.

During the initial launch period, 11 trains with a capacity of 500 passengers each were set to travel from Futian via Shenzhen North and Humen (虎門)to Guangzhou South.

A first-class ticket costs 108 yuan (HK$129), while the second-class fare is 82 yuan. There will be more trains running from 10 January.

Mainland railway official Zhao Penglin (趙鵬林), when asked whether it is necessary for co-location immigration clearance when the Hong Kong section is completed, said the convenience of commuters should be a priority.

If passengers have to go through immigration at every station, he said, it will cause great inconvenience and the rail link will lose its advantage. (The Standard, Amy Nip and Adeline Mak, 31 December 2015)