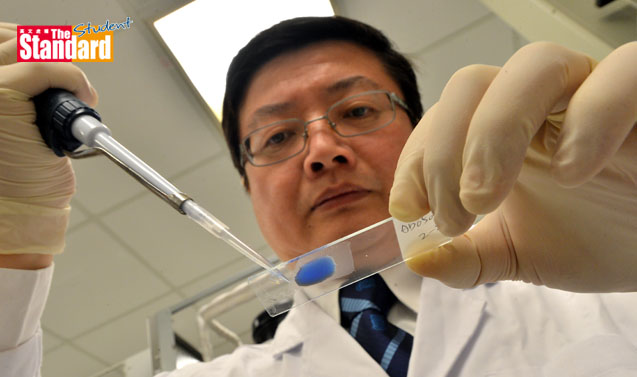 THE SARS coronavirus hides in immune cells in the upper respiratory tract that are meant to defend the body, then comes out and spreads, Aids researchers at the University of Hong Kong (香港大學) have found.

Research team member Chen Zhiwei (陳志偉), head of the Aids Institute and a professor in the department of microbiology, said it is important to understand exactly how the SARS coronavirus causes disease in humans.

“One of the important issues, which had not been so clear was how exactly the virus was disseminated throughout the body,” he told The Standard.

The study showed “for the first time that the virus can hijack the immune cells that are supposed to be used for virus clearance and defence,” Chen said.

“But somehow the virus can hide within the cells, and after reaching the lymph nodes or mucosal lymph tissues ... comes out of hiding and spreads to infect other cells in about two days.”

The team, led by research assistant professor Liu Li (劉利), used what is called the Chinese rhesus macaque model, dividing 15 monkeys into four study groups in a laboratory. A live SARS virus was injected into the macaques through their nasal passages and samples from their respiratory systems checked one, two, three and seven days after infection.

This helped provide a clearer picture of how SARS evades the body’s immune defences, Liu said.

Also, she said, scientists can simulate the spread of other viruses in the upper respiratory tract “in a more effective and accurate way”. This would have “important implications” for early intervention and immunotherapy.

Chen said the next step will be to test an antibody developed by the Aids Institute to see if it blocks the coronavirus. (The Standard, Mary Ann Benitez, 29 December 2015)