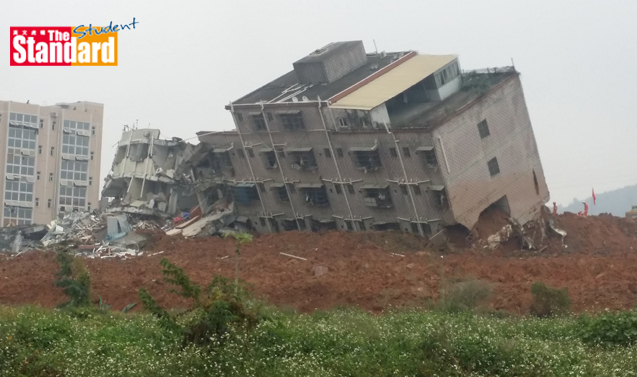 AT least 85 people remained missing in China’s latest industrial accident after a giant flow of mud and construction waste spewed out of an overfull dump and buried 33 buildings in Shenzhen just across the border from Hong Kong.

The site should have been closed in February, but workers said mud and waste had continued to be dumped there, a news portal run by authorities in Shenzhen (深圳) said.

Premier Li Keqiang (李克強) ordered an investigation into the disaster that took place on 20 December.

The mudslide smashed into multi-storey buildings at the Hengtaiyu industrial park (恆泰裕工業園) in Guangming New District (光明新區), toppling them within seconds in collisions that sent rivers of earth skyward.

“The mud had been building up for a few years,” said a witness who lives by the site.

“We didn’t realise this could happen.”

The frequency of industrial accidents has raised questions about safety standards after three decades of breakneck growth in the world’s second-largest economy. Just four months ago, more than 160 people were killed in big chemical blasts in Tianjin (天津).

State television showed devastation in Shenzhen, with bits of broken buildings sticking up from heaps of mud stretching out over the industrial park.

More than a year ago, a government-run newspaper warned Shenzhen would run out of space to dump waste from a building frenzy.

Besides new buildings, a network of subway lines is being built in Shenzhen, and large volumes of earth are being excavated and dumped at waste sites.

“Shenzhen has 12 waste sites and they can only hold out until next year,” the official Shenzhen Evening Post (深圳晚報) said in October last year.