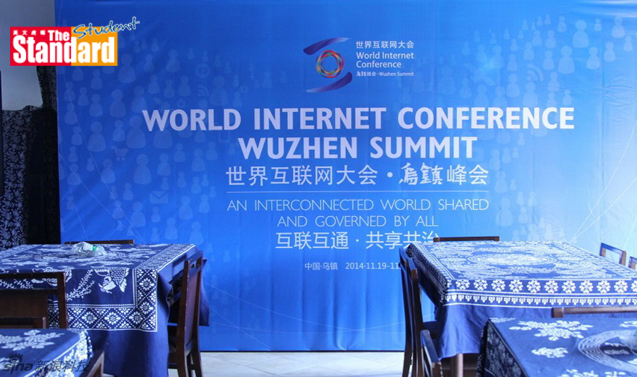 China’s President Xi Jinping (習近平) laid out his vision for the Internet on Wednesday, calling for a new status quo where Internet sovereignty rests in the hands of nations controlling the flow of information.

“Each country should join hands and together curb the abuse of information technology, oppose network surveillance and hacking, and fight against a cyberspace arms race,” Xi told China’s second World Internet Conference (世界互聯網大會).

“Cyberspace is similar to the real world in that both freedom and order are necessary,” Xi added, saying Internet users’ rights to exchange views must be respected while maintaining order in accordance with the law.

Since Xi took China’s helm in early 2013, he has presided over a centralisation of domestic Internet governance and broader efforts to control, and often censor, the flow of information online, experts say.

Those efforts are aimed at maintaining stability, a lack of which the Communist Party (共產黨) sees as a direct threat to its rule.

China infamously operates a ‘Great Firewall’, the world’s most sophisticated online censorship system which blocks – and, as of this year, also attacks – Internet services the government deems unsavoury.

Its workers scour and scrub edgy and unwanted commentary from domestic web services.

Hacking has been a sore spot in US-China relations. On 25 September, US President Barack Obama (奧巴馬) said he and Xi had agreed that neither government would knowingly support cyber theft of corporate secrets to support domestic businesses.

The agreement stopped short of restricting spying to obtain government secrets, including those held by private contractors.

Critics of China’s Internet governance have said foreign tech companies should not lend Beijing (北京) credibility by agreeing to comply with its policies.