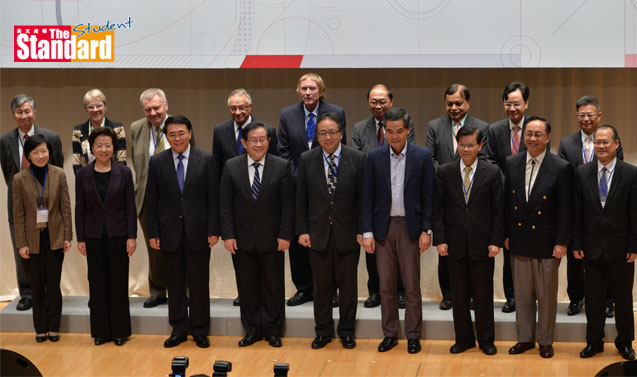 THE newly established Academy of Sciences of Hong Kong (港科院) will cooperate with the Federation of Hong Kong Industries (香港工業總會) to create opportunities for young people interested in research.

There will be annual meetings and recommendations will be submitted to the government, the academy said on Sunday during its Science and Technology Innovation Summit (科學及技術創新高峰會) at the Science Park (香港科學園).

“We are much more like the Chinese Academy of Engineering (中國工程院), giving advice to the government when implementing policies, instead of just taking the government’s money to  conduct research,” founding member Henry Wong Nai-ching (黃乃正) said.

Another founding member, Tsui Lap-chee (徐立之), said the academy will pay more attention to local needs while contributing to a sustainable economy. The academy hopes to give local  scientists a platform from which to introduce their works to science museums overseas, he said.

Speaking at the summit, Chief Executive (行政長官) Leung Chun-ying (梁振英) encouraged more collaboration with the mainland as cities such as Shenzhen (深圳市) have been heavily

He added that 2015 was a year of innovation and technology since it has seen the launch of the academy, the Innovation and Technology Bureau (創新及科技局), the incoming US Massachusetts Institute of Technology’s (麻省理工學院) innovation node, and the Sweden-based Karolinska Institutet’s (卡羅琳醫學院) research centre here.