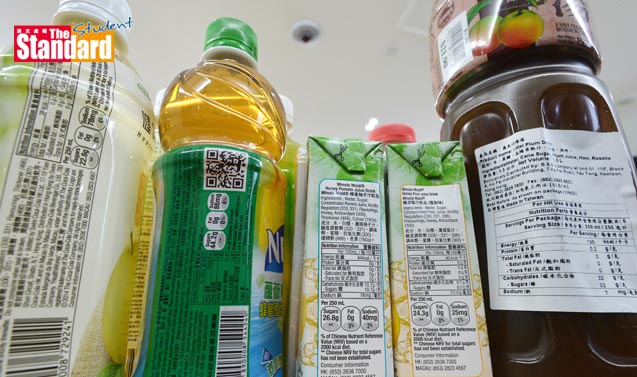 ABOUT one-third of sweet drinks served at Chinese restaurants, hotpot restaurants and supermarkets could be sugar bombs, says a joint study by the Consumer Council (消費者委員會) and the Centre for Food Safety (食物安全中心).

The consumer watchdog collected 141 samples covering 11 types of beverages, 101 of which were non-prepackaged beverages from Chinese restaurants, hotpot shops and cha chaan tengs, and 40 prepackaged drinks from supermarkets and other shops.

Of the drinks, 44 had more than 7.5 grams of sugar per 100 millilitres, which is considered high.

The lowest among the 11 types of drinks were the luohanguo drinks, which contained 1.2g of sugar per 100ml.

A cold hawthorn drink from a restaurant in Tsim Sha Tsui reached the highest, 19g per 100ml, followed by a hot citron honey from Tuen Mun (16g) and a sour plum drink from Mong Kok (13.5g).

“Other than providing us with energy, sugar has no other nutrient value,” he added.

An excessive amount of sugar intake will raise the risk of becoming overweight and obese, and these are related to chronic diseases and cancers, he said.

WHO calls on countries to reduce sugars intake among adults and children
www.who.int/mediacentre/news/releases/2015/sugar-guideline/en